The Warnath Group presented five one-day workshops on human trafficking to judges, public prosecutors, police and members of civil society from Djibouti October 23 – 27, 2016. All the trainings were presented by Warnath Group Experts Albert Moskowitz and Steve Harvey using engaging and responsive teaching methodologies to illuminate actionable strategies for the real-world issues the participants face as they encounter human trafficking cases.

Four training workshops were held at the Ministry of Foreign Affairs in the Capital City. A final workshop was held at the prefecture in the provincial town of Tadjoura.  A total of seventy-two participants attended this series of workshops including law enforcement officers from the Gendarmarie, Coast Guard, Judicial Police, and the national training academy; prosecutors and judges including Sharia court judges, trial court judges, and the State Prosecutor and the President of the Appellate Court (two of the most influential criminal justice officials in Djibouti); and members of civil society.  Workshop topics were tailored to the specific needs of the groups of attendees and included (1) the provisions of the recently enacted TIP law with an eye to helping participants identify TIP cases and TIP victims, (2) skills to strengthen investigations and prosecutions of TIP cases, and (3) techniques to build trust between IO’s, NGO’s, and the criminal justice system to encourage more victim identification and case referrals.

The new Law No. 133/SB/16/7 L Relating to the Fight Against Trafficking in Persons and Smuggling of Migrants was a primary focus of all of the training sessions, as many participants were unfamiliar with the newly enacted law and the difference between smuggling and human trafficking, as well as the provisions of the law providing new tools for addressing human trafficking in the context of criminal justice and support for victims.

Demonstrations, interactive case studies, participant response-ware “clicker” technology activities, and role-play interview exercises had the desired effect of turning the abstract elements of the TIP and smuggling definitions into concrete and easy-to-visualize concepts.  These dynamic techniques fully engaged the participants in the coursework and exercises, providing many opportunities for the participants to immerse themselves in constructive activities.  Participants responded to this interactive approach with vigorous discussions, meaningful Q&A sessions, thoughtful comments and excellent feedback for the trainers.  As a result, the Experts were able to respond to the participants’ interests and needs, further tailoring the course to maximize the connection between the practical skills taught and the issues faced by participants in their everyday professional roles addressing human trafficking.  For example, because Djibouti is primarily a transit country, one specific challenge for Djibouti officials involves identification of potential TIP cases within the context of large scale migration through the country to other destinations. The ability to align overall educational themes and promising practices – including identification, good interviewing and listening skills, and practical approaches to maximize witness cooperation – to the real-world issues confronting participants within their unique contexts, is a hallmark of the Warnath Group training and technical assistance programs. 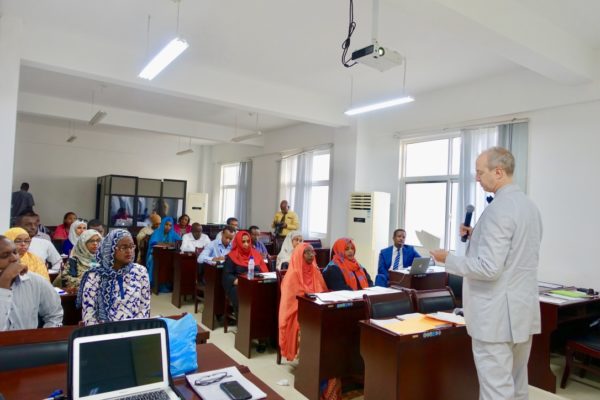 U.S. Ambassador Thomas Kelly delivers remarks during one of the training sessions.

The Warnath Group Experts also met with the State Prosecutor on October 22 to discuss possible amendments to the new trafficking in persons law, which was enacted in March earlier that year.  For more information on the Warnath Group’s technical assistance work in Djibouti, please read the most recent update.

This series of workshops and meetings took place at a critical time for Djibouti given the new anti-human trafficking law.  Discussions with the workshop participants as well as with the State Prosecutor and representatives from the U.S. Embassy made it clear that increasing the number of TIP cases identified, investigated and prosecuted is an urgent priority for Djibouti.  These workshops were made possible by the U.S. Department of State’s Office to Monitor and Combat Trafficking in Persons (J/TIP), and with the help of the U.S. Embassy in Djibouti.

Group photo from one of the training sessions, including Warnath Group Experts Steve Harvey and Albert Moskowitz.