Justice Sector Professionals in the Kingdom of Tonga, and the Republic of Kiribati, Trained by Warnath Group Experts 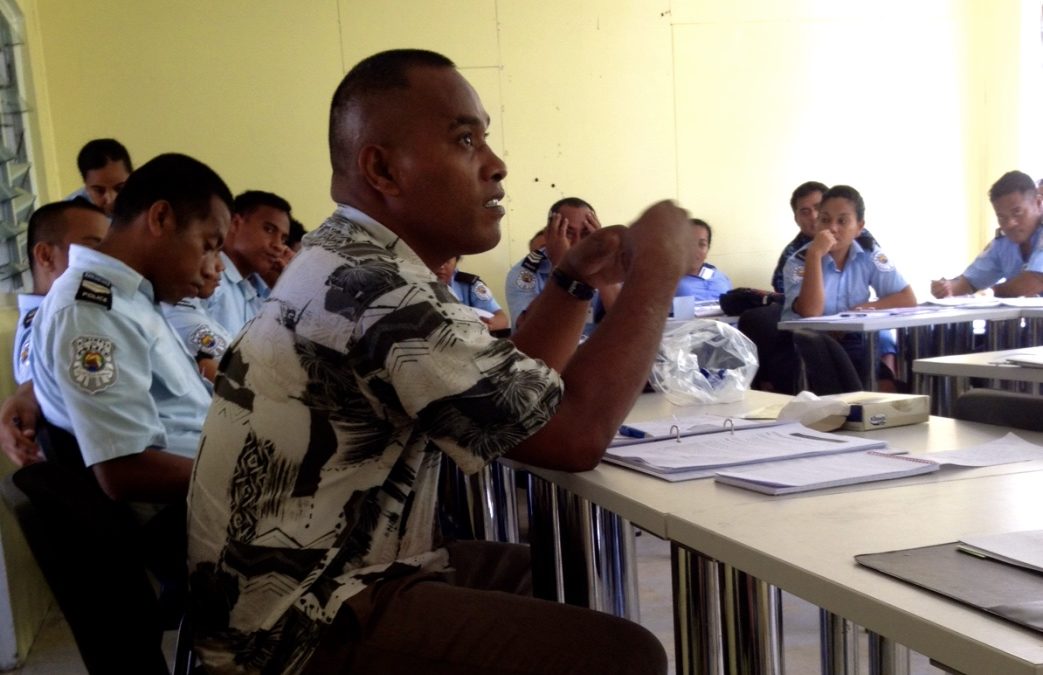 Warnath Group Senior Advisor on Law & Policy Sheila Berman, and Warnath Group Expert Jenny Stanger,  National Director of the Freedom Project to End Modern Slavery of the Salvation Army of Australia and former co-founder of the Coalition Against Slavery and Trafficking (CAST) in Los Angeles, designed and delivered country-specific customized anti-human trafficking trainings in the Kingdom of Tonga, May 21-22, and the Republic of Kiribati, May 27-28.

Sione Sisifa, Acting Solicitor General of Tonga, presented the Tongan National Law.  The Deputy Police Commissioner of Tonga joined the training for the certificate ceremony where he delivered remarks and congratulated the training participants by handing out their certificates.  Eric Aldrich, Second Secretary (Political) from the U.S. Embassy, also attended the training.

At the Police Training Center in Betio, South Tarawa, Kiribati, police officers participated in the two day professional skill-based training.  The training focused on international and domestic laws, victim identification, and victim interviewing tailored for human trafficking cases in the Kiribati context.  Participants also practiced their identification and interviewing skills through exercises and role-playing using fictitious scenarios that reflected both the nuance of human trafficking cases and the local context.

Tewia Tawiita from the Office of the Attorney General of Kiribati spoke on the Kiribati National Law.  The Deputy Police Commissioner of Kiribati attended the closing of the training to commend the participants and hand deliver certificates.  Repeka Ufiamorat, Economic Assistant from the U.S. Embassy, was also in attendance.

The Warnath Group’s team teaching approach — with Warnath Group Senior Advisor Sheila Berman, a former DOJ Prosecutor, and Jenny Stanger, an expert in providing direct services to victims in Australia (and previously in the United States) — offered the opportunity for participants to engage in in-depth substantive discussions and interactive sessions with experts able to share practical knowledge based upon their work on human trafficking cases.  Both trainings received positive feedback from participants and government officials. The trainings were made possible by the U.S. Department of State’s Office to Monitor and Combat Trafficking in Persons (J/TIP), and with the help of the U.S. Embassy to Fiji, Kiribati, Nauru, Tonga, and Tuvalu located in Suva, Fiji.

Tonga participants reviewing materials and listening to presentations during the first day of training.