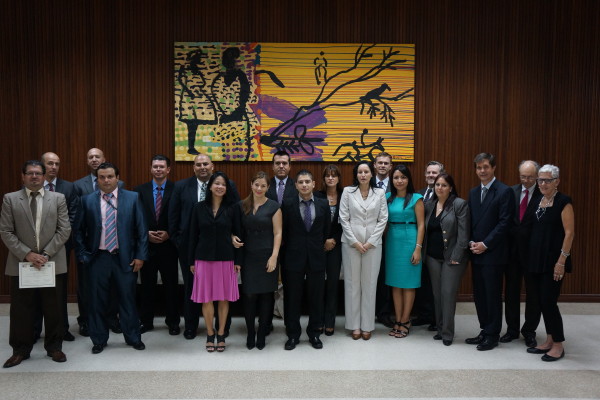 From July 15th to 19th, a team of four Warnath Group experts and staff, including CEO and Founder Stephen Warnath, conducted a series of three successful training sessions for over seventy Costa Rican judges, prosecutors, and police.

The trainings were held at the Supreme Court building in the heart of downtown San Jose, Costa Rica, with the assistance of the Bureau of Cooperation and Foreign Affairs. Jason De Rosa and Hellen Sanou of the US Embassy in San Jose provided invaluable support to ensure the success of the training. In all, five days of training were held, with two sessions lasting two days for prosecutors and police, and one day-long seminar held for judges.

Warnath Group Experts Florrie Burke and Albert Moskowitz conducted the training, with CEO Stephen Warnath. Costa Rican prosecutor Miguel Abarca also provided a valuable contribution by presenting and discussing the nuances of local laws. The trainings focused on interviewing, managing, and providing assistance and services to victims of trafficking, as an integral part of getting their cooperation to ensure a successful prosecution and conviction. Subjects included victim interview strategies, the psychological effects of trauma, and in-depth analyses of both international law and Costa Rican laws on human trafficking. The judicial workshop focused on the laws, and the role of the judge in examining and ensuring the protection of the victim. Prosecutors and investigators also engaged in simulated victim interviews and trial preparation sessions with actresses trained by the Warnath Group to portray trafficking victims for that purpose, an exercise that yielded both great challenges and great insights for participants.

Participant responses were overwhelmingly enthusiastic, with many requesting that the team return to the country in future to conduct more in-depth trainings on a variety of subjects. Both Eric Nelson, the US Embassy’s Charge d’Affaires, and Cristina Rojas, the Chief of the Bureau of Cooperation and Foreign Affairs, expressed their gratitude for the training and emphasized its importance to the work ahead in Costa Rica and in the global fight against human trafficking, at the conclusion of the judicial seminar.

More photos from the training: